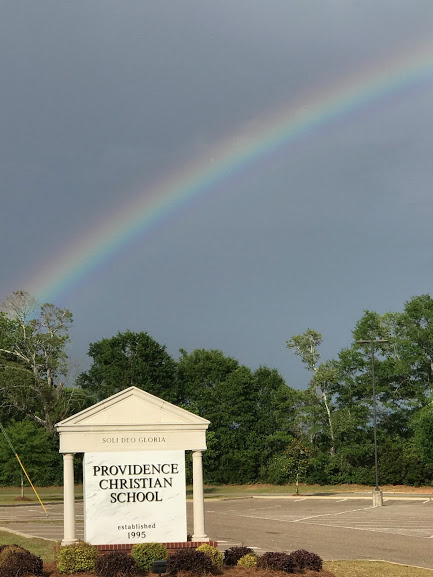 In the early 1990s, a number of Dothan families began to prayerfully seek a way to offer their children, in the grammar school years and beyond, the same quality, Christ-centered education they'd received at First Presbyterian Preschool. The following is a brief overview of how God provided the resources to make that desire a reality.

One of the most significant Providence blessings centers around how the school came to be located at Camp Meadow Wood. The story began nearly forty years ago when Dothan businessman Charles Woods deeded a large piece of property on Murphy Mill Road to the local Girl Scouts. For decades, the front 15 acres remained a terraced field as the back portion of the property was developed into a well-equipped camp which hosted overnight and daytime outings for scouting groups. After many years, "Camp Meadow Wood" reverted back to Mr. Woods.

Woods then contacted his long-time friend and television station associate, Ann Varnum. As a result of the call, Ann and her husband, Jerome, agreed to accept the responsibility of setting up a not-for-profit corporation to oversee the use of the former camp. First Presbyterian Church members Carl Jones, and his wife, Melinda, were asked by the Varnums to serve on the new board. Mr. Jones would later serve on the founding board of Providence Christian School.

Prompted by God's leading and the enthusiasm of current and former First Presbyterian Preschool families, the session of First Presbyterian Church made the decision in 1995 to start a classical, Christian School. However, the church felt that due to nearly full use of its own facility, the school needed to be located on other property. Since a fundamental principle of the school was that the families involved would give primary leadership to providing school funding, it seemed that a fall 1995 start-up would be unlikely. The newly-formed school board voted in April to establish July 1 as the deadline for both hiring an administrator and for determining the school’s location.

In late April the Meadow Wood board offered Providence the use of the front 15 acres of land for $1 per year for 99 years. A formal agreement was drawn up with Meadow Wood, Mr. Woods, the First Presbyterian Church Session, and the Providence School Board all agreeing to the proposal. Significant problems remained, however. No water or sewerage existed. There were no buildings and no long range plan on how to best use the 15 acres.

In the course of a few weeks, God brought a very special team together. The group included a civil engineer, a builder, and a board member with the time and ability to oversee the project. The late George Gaut played a crucial role in getting the City of Dothan to move up its 1996 plans to run water to the point on Murphy Mill Road that would service the school. An anonymous donor provided the funds for a waste disposal system that has the ability to grow with the school for years to come. Other money was raised to pay for the buildings, the driveway, electrical hook-ups, and other related needs. A budget providing for a 3 year loan became feasible.

While the blessings of that summer are too numerous to describe in this brief overview, a few are worth noting: In May, a couple with no children or grandchildren in the school gave approximately $29,000 to be used to endow a scholarship fund. In July, Alfred Saliba Homes approached the Meadow Wood Board about being annexed into the city. The proposed annexation would help Saliba get other property into the city limits. In return for Meadow Wood’s help, Saliba agreed to pay for one half the cost of a nearly $30,000 turn lane. An anonymous donor contributed another fourth of the cost.

The result was that in August of 1995, Providence Christian School opened with 56 students. Today, PCS serves more than 700 students and employs a staff of more than 80. Our campus has grown to include numerous academic buildings and co-curricular facilities. Our multi-purpose gymnasium and academic building was completed in 2003, and our grammar school building, including two state-of-the-art libraries, was opened in 2007. Our original core campus, known as the cottages, still houses our Logic School and is a hub of campus activity.

In the early years of the life of PCS, the blessings continued: Trinity Presbyterian Church of Dothan voted to close their church on South Oates Street and give their property to Providence. As the first school to offer Christian education to area families in 1959, Trinity's generosity enabled them to re-invest a valuable asset in a way that continues to make this type of education available locally.

The School has been blessed with a “widow’s mite” account as well. A widow in the community, who loves the Lord and children, made monthly contributions from her social security-based income every month for almost a decade. She had no family enrolled in the school.

Providence Christian School is blessed with a facility that is literally a gift from God. He used people to bring it about, but in a way that prompts all involved to say “to God alone be the glory.” Our campus serves as a clear reminder of God’s faithfulness in often doing immeasurably more than all we ask or imagine. PCS continues to grow in God’s blessings, as increasing student enrollment drives expansion of programs and facilities. We are thankful for the Lord's provision, and for so many families who have embraced the vision for classical, Christ-centered education in the Wiregrass.